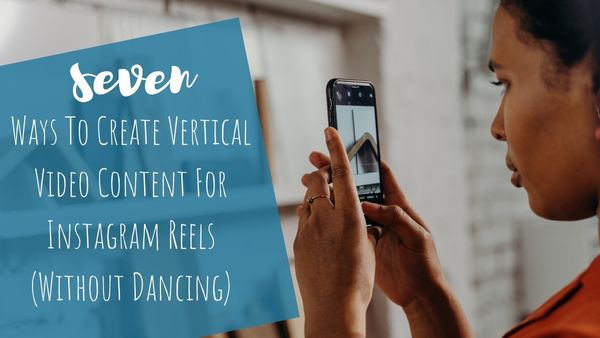 For the last few years, social networks have been slowly turning toward video. First, it started with regular video. Then Live video. Then expiring video. Now vertical video. Inspired by the success of Snapchat and TikTok, big names like Facebook and Instagram are turning their video vertical.

Generally, this shift had been somewhat under the radar except for social media content creators who had to keep across the ever-changing video formats. However, it became mainstream news when Instagram announced it was defaulting all video that was under 15 minutes to vertical in the same week that they also announced that Instagram was shifting its main feed to be a mostly (vertical) video rather than a photo feed. The news almost broke the internet (yes, that was a Kim Kardashian reference). Instagram then quickly backpedalled on the feed change, but videos under fifteen minutes will still default to vertical video. We’re yet to see if this change will be rolled out in time, but perhaps as a slower shift.

Of late, Facebook has also been shifting its home screen to put Reels and Stories front-and-centre, so it looks like that, in some form, vertical videos are here to stay whether we like it or not.

Landscape video is still used in digital advertising and on social media platforms like Twitter and LinkedIn. If you’re producing original video content, you need to know which platforms you’re publishing on so that you know if you need edits of vertical or landscape formats or both.

Culturally, a lot of vertical video content is inspired by TikTok. This means that vertical videos are often someone speaking directly to the camera or dancing and pointing to captions on screen with their latest tips and tricks.

The culture of the ‘people talking to camera’ vertical video content can be a challenge for a few reasons:

b) introverts or the camera shy just don’t enjoy being on camera – and if someone is visibly uncomfortable on camera, it isn’t a great experience for the audience (the opposite of what you want when they think of your business!)

c) and of course, filming a person can take a lot of time, especially if you need to get dressed, find a suitable location and lighting. It’s not something everyone can commit to regularly, so having alternative video ideas is particularly useful.

I think if you’ve got a situation where you do have someone who can jump in front of the camera, it can be a great way to build a connection with the audience, so it’s a content type that is definitely worth throwing into the mix if you have it as an option. But the reality is that it doesn’t work for all businesses.

There is plenty of inspiration online for Instagram Reels sharing expert advice or dance-offs — but what kind of content can we make without getting in front of the camera?

In today’s blog, I’m going to share some ideas for Instagram Reels for the rest of us.

How to create vertical video

Just to cover off the basics, it’s worth touching on what we actually need to create vertical videos. First things first: you do need some video content.

Some starting points are:

When you’re planning your videos, remember that on social media, this content is always accompanied by post text or caption. This means that you can consider what content will go in the video, and what can go in the caption. This might mean that some video is simply to draw the eye and encourage people to read the caption, rather than a whole production with the primary information in the video (I’ve got come examples of this below).

While you can edit videos on your phone, my preference is often to use a computer using a cloud-based video editor simply because for some video formats, it’s easier.

FlexClip is a neat video editor which is designed for vertical video, which makes it easy to edit all of these elements quickly together and then export to your favourite location (including Google Drive – which is a stellar feature if you then are scheduling that video). FlexClip also includes a photo, video and music library so you can create content faster without needing to source all the elements independently.

It’s also handy to edit using a video editing tool on your computer because you can easily use your brand colours – a really simple yet effective way of keeping all your content looking professional.

Check out the ideas below, which I’ve created using FlexClip. No bad dancing in sight.

This Reel is based on a format that is popular at the moment, which is a summary shot of a “day in the life”. This content is a mix of stock video, filming my screen and original filmed footage. Adding a cute soundtrack and some emojis gives it a lift.

Tips and tricks with bullet points

Content with tips and tricks using short bullet-point captions is common on Reels. This is a version where I’ve used a calming fern in the background from stock video. The core information for this post is in the caption so the video is essentially a tool to catch the eye.

It’s common on social media to share a testimonial quote, which we often see in images. This is playing on that format which has been animated in (thanks FlexClip!) to give it a bit more oomph. I’ve got more information and a CTA in the caption – this is just to grab the eye.

Inspired by carousel posts with text adding information across a series of slides, this is a Q and A video where text is used across multiple slides to convey the answer. Using this same copy (and/or adding more detail) in the caption is useful for accessibility or for people who want to read the text at their own pace.

The “Point Of View” meme is one looking at someone’s perspective and making a light-hearted joke about it. I’ve used my computer’s screen recording software – Quicktime – to capture my screen and create a cute meme based on the work at my computer. Adding a title adds some pizzazz.

For the days when you don’t want to get out of your PJs, creating an audio clip might be an approach that works for you. It helps creates human connection, without needing to do a whole filmshoot. This is an example of a post created where the audio is the primary focus of the post. I recorded this on Audacity on my computer to do some light editing, but FlexClip does have a feature where you can record directly from the website.

Vertical videos are becoming the norm on much of social media, so it’s time to embrace this format.

If talking heads or dancing isn’t something that translates to your business, hopefully this post has given you some inspiration to help you experiment with some of these other formats to help tell your brand story.

p.s. On writing this blog, FlexClip have kindly provided me with a subscription to their service. Thank you! 😍

Want to work together? Rachel would love to hear from you. Get in touch today.
Home
Blog Newsletter Contact Shop