The Free Tools To Help You Choose The Right Instagram Hashtags

Instagram has been the darling social network for a few years now. With a simple, clean interface, it does one thing: share your gorgeous pics with the world. For those trying to grow their Instagram following without spending cash on an ad buy, one of the most effective ways to grow is by choosing the right hashtags.

Because Instagram is mobile-based, it can be easy to want to throw out whatever hashtags you think of in the moment you are posting your amazing pic. But the reality is that the big Instagrammers are very strategic with the hashtags they use. So if you want to play with the big boys, it’s time to do your homework on the hashtags you want to use.

Before we jump into the tools we can use to help us research the best hashtags to use; it’s worth checking off the basics of Instagram hashtags, so we’re all on the same page.

Inspired by Twitter, hashtags are a way of ‘tagging’ your content to identify it as being about a specific topic. On Instagram, these are usually descriptions of the photo, so when people search that topic, people can find photos to do with that subject. The simplest example of this is that if people are in a city, they will hashtag their location, such as #barcelona. Or, perhaps they are describing features of their photo, such as an unfiltered photo, using tags like #nofilter.

However, over time, hashtags evolved and began to cover other topics too. As Instagrammers began sharing more diary-like content, the hashtags began to change, too, with a focus on emotions. For example, on a photo of friends, hashtags like #bffs or #love began to rise.

When considering which hashtags to use, consider both elements – descriptive and emotional.

Then, to be strategic, consider which hashtags are most commonly used on Instagram and make a call on which hashtags you want to use from a reach perspective.

Our intuition would draw us to only use hashtags which are ‘high volume’ or ‘high reach’. However, there is a risk in exclusively using these ‘big’ hashtags, because it is also likely your post will be ‘flooded out’, because thousands of people may use that hashtag a day, yours will be lost in the masses. For this reason, it’s good to select a mix of high and low reach tags.

Additionally, selecting a variety of unique tags with every photo means that Instagram is far less likely to think you’re a bot (which is a big deal when Instagram has practically declared a war of bots at the moment, shadowbanning accounts that show bot-like behaviours).

Related: How To Design The Right Hashtag For Your Business

Check out how Xero have used a variety of hashtags in their post below. They have branded hashtags (#xerocustomer), descriptive shots (#cupcakes) but then they have a variety of hashtags designed for high reach. In this, they have used anything food, coffee or chocolate related, including hashtags like #lunch. This would obviously never be someone’s actual lunch in terms of a literal descriptor (right?!), but it would be acceptable under the high-reach #lunch hashtag because it is food-themed. They’ve also jumped on the #mondaymotivation hashtag, leveraging the emotional angle, in addition to it being high reach.

Now that we’ve covered off what hashtags are let’s highlight the tools to keep in mind to help you find the best hashtags to use for your Instagram posts.

First up, you will probably want to keep a record of your hashtags in something like Excel or Google Docs.
You can document which hashtags have a high or low reach, or what kind of themes would work best with each hashtag (for example, a shot of people would allow you to use the #bff hashtag with a bit of flexibility, but it wouldn’t work so well on a photo of your coffee!)

It also has a nifty little section that analyses your best day of the week, time of day and popular filters which have led to your highest interaction so the next time you post, you can keep these in mind.

Squarelovin highlights the hashtags you’ve used the most and keeps a handy list of the most common hashtags trending on Instagram at the moment, so if you want to throw in a trending hashtag or two for additional reach, it’s at your fingertips.

After analysing your own efforts, a solid next step is researching your industry, influencers or your key competitors. What hashtags are they using? Which ones are working for them?

If you don’t know who your competitors are, Google your industry or business type, see who comes up in Google search. Open the first ten websites and see if they are on Instagram. Make a list of them and them audit the hashtags they use.

SMAudience shows you the hashtags used by specific accounts and ranks the hashtags by the reach they provide.
This is a useful starting point to see what kind of hashtags are working in your industry.

Obviously, take these with a grain of salt – just because a competitor is using a particular certain hashtag, it doesn’t mean they have done their homework on the best hashtags to use. But if you look at a variety of accounts, you are likely to hit a few companies in your industry who are really onto it.

While you might not want to use all (or any!) of the hashtags industry peers or competitors are using, it might give you some ideas for hashtags you hadn’t thought of before. 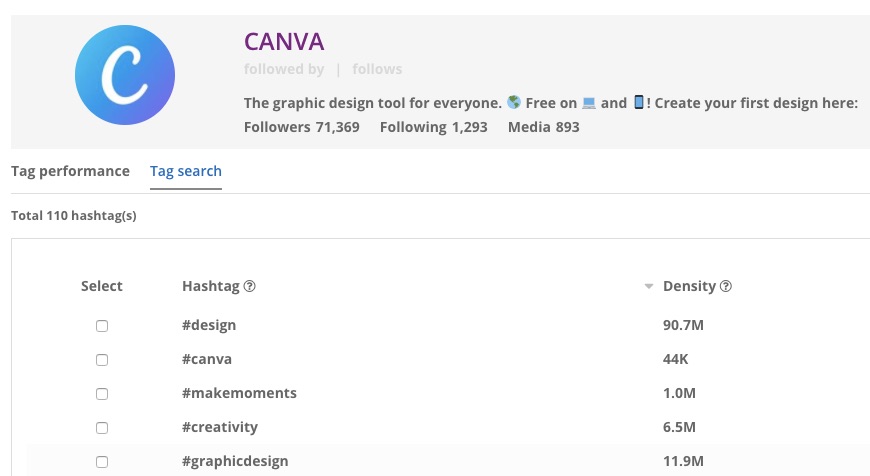 Need some inspiration for hashtags? Throw in your industry hashtags, and this site will recommend the hashtags relevant to that topic. It recommends hashtags by relevance and popularity, which you can scroll down to see how connected the suggested hashtags are to your topic.

This is particularly useful to find those niche hashtags and not just the big ones. Many other sites show you the top used hashtags, but this one is great for those really specific hashtags around a topic.

While Twitter hashtags aren’t quite the same animal and Instagram hashtags, there’s no reason you can’t get some inspiration for hashtags from Twitter. Check out what’s trending, popular hashtags and related hashtags. Check out these two tools to get ideas for more hashtags.

Hashtagify me is useful for showing related hashtags to a topic or keyword, similar to Display Purposes, except that it’s just for Twitter. Ritetag shows trending hashtags to do with specific topics. Again, it’s for Twitter, but it might help inspire new hashtags.

While it’s likely that the trending hashtags for each day have so much activity that your posts will be drowned out on that hashtag, there might be opportunities to take advantage of in terms of trending topics or key dates. Things like #mothersday or #starwarsday may give you new opportunities to reach new audiences. Check out top-hashtags.com to see what the top trending hashtags are and keep an eye on the upcoming key dates you can take advantage of in your content planning.

When searching top hashtags, you’re likely to see a few random ones like #igers, and #l4l. For many businesses, these hashtags won’t be something you’ll want to use, but it’s good to understand what they are and why they exist.
Tophashtags.com also has a useful tool to help you see the reach of the hashtags you are planning on using – just pop them in the tool and see the reach of the hashtags you want to use.

Okay, this one is a little random. The Google Ads Keyword Planner is a tool to help you plan your Google search ads. Type in your industry, and it will let you know the words people are most likely Google to do with your business. Does this have much to do with Instagram hashtags? Not directly, but it might help you gain some insight into how your customers might view your business and the kind of content, and hashtags, which might best resonate with them.

From the example below, we can see that people are far more likely to Google bikram yoga that the other kinds of yoga – so drawing on this an inspiration, we could test to see if hashtags around #bikramyoga are likely to be more effective than other yoga-themed keywords.

There are plenty of tools out there to help you choose hashtags more strategically than just guessing.
For the most part, researching hashtags for your industry using these tools will take less than an hour, and you’ll be much better informed about the kinds of hashtags that will give you greater reach. Throw your list into your Google Doc, and the next time you are Instagramming, throw in a mix of high and low-reach hashtags based on your research.

Do you have any other awesome tools you use to find Instagram hashtags? Share the love the let us know in the comments!