How To Increase Your Social Media Campaign Reach with One Email 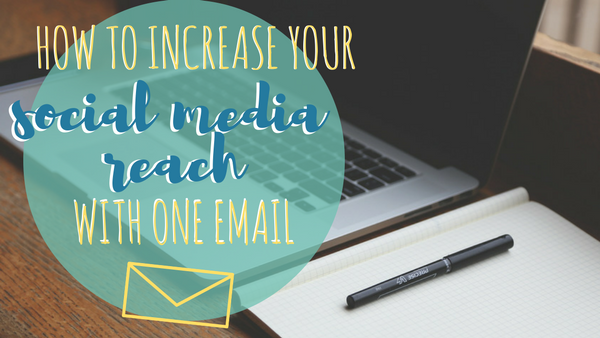 When budgets are tight, it can be tough to get a message out on social media when you don’t have an advertising budget. When you’re relying on word-of-mouth for a campaign, it can be a real struggle to get the kind of reach you’re after, especially if you’re launching a new product. Even if people do talk about your product, it feels like a lot of the time they aren’t using the hashtags or official tags that you’d like, which feels like a wasted opportunity with every post.

However, there is a simple way to get the word out – and it requires just one email. That is … one email to your publicity or media relations teams.

As social media can be a department which sits anywhere from IT to marketing, it’s no wonder that sometimes it can be tough to collaborate with other departments – even if everyone is working on promoting the same thing. All too often, we see the news of our campaign in a print publication – but it’s missing the crucial information of the official event hashtag or social accounts. This is obviously a huge opportunity missed especially if we’re working in organisations with smaller (or non-existent!) advertising budgets.

It’s essential to work with your publicity or media relations teams to ensure they know what they can share about the campaign from a social media perspective. They are often focussing on a different aspect of promoting a campaign, and social media doesn’t cross their mind – so as social media specialists, we need to to make these connections happen and let them know what hashtags or accounts can be shared when.

Related: The 12 Tactics to Launch a Social Media Campaign with No Money

Working with publicity or media relations teams also unlocks the door to collaborating with other organisations or celebrities. Often influencers are not engaged properly in terms of what they could potentially do on social media because those who manage social media day-to-day don’t work with these influencers. But publicists do. And, we’ve all seen the cringe-worthy tweets desperate organisations send out, tagging any organisation or celebrity they can think of to try to get publicity. Be smart and work with the people in your company who are already experts at this.

Make it easy for partner organisations or celebrities to share your social media information by letting the publicist working with them know what they are allowed to post and when (especially if information is under embargo). When you’re working with complex launches, it’s too-often that each department will focus on their speciality, and they won’t know the details of what can be promoted when – so they will err on the side of caution and say nothing. Make those internal connections work so that those who manage corporate partner relations and talent know what they should be briefing in terms of your social media.

Let your publicist know that you’d be keen to have content on social media posted live at the event. If they are working directly with talent, chat to them and see if they are interested in getting involved.

Irrespective of if they use your ideas or if they have their own, the key thing that needs to be passed on are the key messages or themes, the hashtags or official accounts they should tag.

This gives you a step in the right direction, and, if you’re lucky, you might get a post or two from an influencer about your product or event.

Get in the paper

If you have a media relations team working with media or newspapers, their priority will be securing an article in the publication.

It might not be on their radar to ask the journalist writing about it to promote the event hashtag or usernames.

Let the media relations teams your work with know what social media information they could let journos know about so those print articles can spread the work for you.

Put it on a Press Release

There’s no reason that press releases can’t have social media information in the footer to help spread the word. Consider including your official social channels, the accounts of ambassadors, or hashtags for the event.

Work with your corporate comms teams to see if their official channels can promote the official hashtags or accounts for an event – they will also be working hard to publicise the event using their own contacts. See if they can also help out on their channels, too.

Updating your email signature can be a simple and effective way to spread the word about a campaign – including adding official hashtags.

Suggest corporate comms, publicity and media relations teams update their signature, especially if they are talking day-to-day with people externally about your event. It’s a simple, free way, to spread the word about your project or launch.

Social media as a department often focussed on external communication, so it can be easy to miss big opportunities of spreading the word about your social campaigns internally.

However, by missing the collaboration with departments like publicity and media relations, it means that you’re limiting the potential for your projects or launches to get much greater reach.

Creating connections internally in an organisation to ensure that key elements of a campaign, like hashtags, are distributed to traditional media outlets is a really simple and effective way to get the message out.

Get connecting and be social inside the office, in addition to online, to give your social media campaigns that additional boost. Go on –  buy your local publicist a coffee and see if you can get come collaboration happening!