How to Nail Live Social Media at Your Next Event 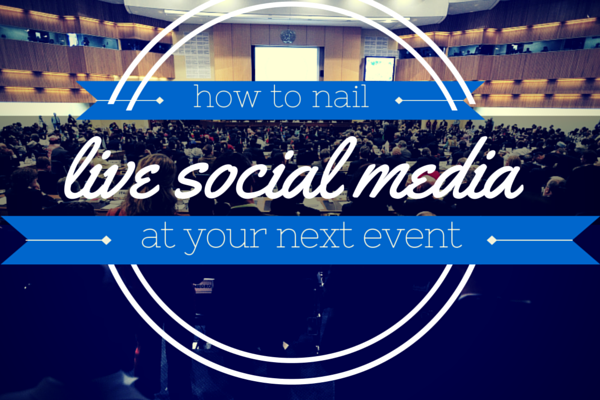 Incorporating social media into a live event can be great fun. It’s an exciting way to create a vibrant hum at an event, hear voices from people who might be self-conscious in speaking in a large crowd, and also the a marketing opportunity as word of the event spreads to others through the hashtag.
However, events are stressful enough as it is – adding live social media integration can add another level of chaos. I’ve worked across integrating live social media into large and small events – and television broadcasts! – and it’s completely possible that with a bit of planning, it can be panic-free process.

What to consider then adding live social media at your event

Before you run your event, you need to select a hashtag that is unique and isn’t already used. A simple search on Twitter and Instagram will give you an idea of how many people already use the hashtag you’ve got in mind. If people rarely use the hashtag or it hasn’t been used it in months, it’s a pretty safe bet that your event won’t have stray mentions flying in.
If you’re running a conference, I would also make sure your hashtag passes the thumb test – which is, of course, how easy it is to type with your thumbs! If your hashtag is long and switches between capitals, lower letters and numbers, it can quite easily be thrown into the “too hard” basket by attendees – so make sure it’s easy to type on mobile devices!

There can never be too much promotion of the official hashtag. You don’t want people wondering what the correct hashtag for your event is, and just using a random one. Ensuring your attendees’ posts are in the same place is essential in creating conversations at your event, increasing the reach of your hashtag and making it more likely to trend on Twitter.
Ensure your presenters know the official hashtag and put it on their title slides, have it on your event posters, flyers, website, post it in your ‘about’ section on your twitter account. Make sure that wherever someone can see your official event information, they can see your hashtag. And, just in case anyone is confused, in the preceding week and several times throughout the event, send a few tweets to remind people of the official hashtag.
You might even want to consider searching your event name without the hashtag in Twitter search because people might be talking about the event not knowing the hashtag. Just pop them a tweet to let them know!

While most live events use Twitter as their official backchannel, it’s not the only social network to use at an event.
Leveraging Instagram photos or Periscope broadcasts can be heaps of fun and are a great record of the event.
Becuase Facebook is the largest social network, don’t overlook it as a potential place to source comments. Post an “official thread to ask questions about this panel” and incorporate those questions or responses in your live panel discussion.

Stir up that convo

The most important thing to keep in mind is that people aren’t going to tweet without a reason. If there’s is the motivation to brag that someone is at an event, it will break down those tweet-shy individuals. However, if you give people a reason to tweet, like letting people know that you will be taking questions and comments from social media at the end of the session, then that will encourage people to get tweeting.
And, of course, there is nothing quite as effective as your host giving a verbal callout of the hashtag, including spelling, it to show that those on the stage care about incorporating social media into the session (and not just the marketing team!)

Okay, this is revealing a little bit of the magic behind the curtain, but most well-executed events which incorporate social media is a smartly executed stage show, with a lot of pieces prepared beforehand.
If a host is reading questions they’ve received on social media, often, this is based on a shortlist someone has fed to them on an iPad. This might be a Google Doc or via email. It’s not saying the questions are faked necessarily, but it means that that host doesn’t need to think about juggling six panellists, a live audience and skim through a hundred conversations on Twitter to find an appropriate question. It just makes the process smoother.
On top of this, you might want to create a social media script ahead of time. Have a series of tweets written ahead of time that can be sent out in real-time to complement what is happening on stage.
For example, when a panellist is introduced, a tweet is sent out with their name and correct handle.  If a sponsor is mentioned, a link to their site or promotion is sent out. Or, it could be a tweet sent out which quotes what the keynote. If possible, written to fit 140 characters, including the hashtag, in advance.
Tip: Using Excel’s =LEN() formula to count characters in a cell will save your life if you’re turning a script into tweets.
I’d also consider that these social media backstage crew members use laptops, not phones, have their own internet connection and their own power supply.

On top of this, a well-designed event will always want a backup plan.
Whether this is back up questions the host “has always wanted to ask” stored away on their iPad, or your Mum tweets in with a question you’ve asked her to send at exactly 2pm, it’s essential to not rely on people sending in content. Don’t hang a 15-minute segment on tweets that might never come. If they do, that’s awesome, but know that live events having real questions sent in rely on the attendees, their motivation, mood and a bit of luck.

Visualise it and moderate it

A publically displayed social media feed projected on a wall adds a real buzz to an event. It should be somewhere where it can be read by both attendees and panellists (because there is nothing more awkward than a crowd laughing at something the panellist can’t see).
There are loads of free tools for this – whether it’s VisibleTweets, Twubs or Palisades.
Keep in mind the tone of your event – do you want the content moderated? Or, if your event is pretty laid back, does it not matter what is on the feed? If your hashtag trends, spambots jump on pretty quickly, so moderation can be a useful tool in this regard. Get a friend colleague on deck to help moderate this feed in real time.

Why not mix it up? Add multimedia integrations like Twitter polls to your event, to get people to interact with it. Get attendees to vote on a session for the next day, or which question is asked of a panellist.
You could even use a hashtag as a voting mechanism, collating the votes using #IFTTT to record the number of times the hashtag was used.
Related: 8 Ways To Automate Your Social Media To Give You More Time For Coffee

It’s impossible to manage an event, take (and tweet!) photos, answer questions on social media and ensure information to get the event moving like start and finish times of sessions or rooms of sessions can be managed by one person.
I would recommend having a couple people each with separate tasks manage your social media accounts. One might be updating session information and responding to customer service questions while another might be a roving photographer.
Add an extra person if you’ve got a projected visualisation on the wall, and if you’ve got a live Q and A, add another again. It might sound like a lot, but social media can be pretty busy and a live event is not where you want to – very publically – drop the ball.

Live social media is great fun at events, but think about how it’s going to work first. Keep in mind how you’re going to promote your hashtag, how you’re going to incorporate it into your sessions, your backup plans and moderation, and, of course making sure you’ve got enough people on hand to help out.
Good luck with your next event (and I expect my invite in the mail! ;))