[ROUNDUP] How to Use Social Media for Crowdfunding 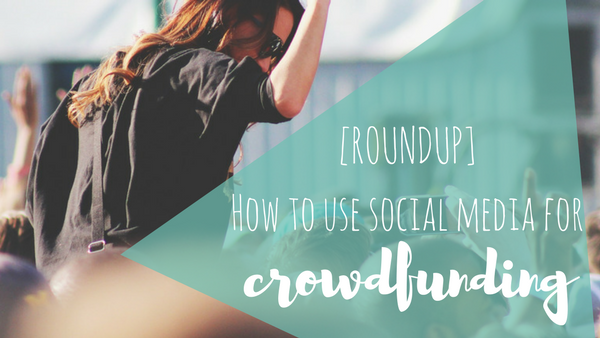 One of the hottest projects to work on these days is a crowdfunding campaign: where a community of people band together to help another person across the world fund a project – whether that’s something creative like a film, or an innovative new piece of tech (like the amazing Rocketbook).
Over the past few months, I’ve been involved in loads of conversations from keen crowdfunders-to-be, wanting to know just how they can use digital marketing to launch a successful crowdfunding campaign. So, I dove into a series of podcasts talking to people who have run successful crowdfunding campaigns to work out just how much is actually organic social media – and how much is clever digital marketing planning.
I listened to several different podcasts series, but I learnt a lot from the crowdfunding focused podcast series on the Foundr podcast, where Nathan Chan interviewed successful crowdfunders to learn their secrets.
Let’s break what I learnt.

One of the key lessons I learnt from these podcasts was the success of a crowdfunding campaign is not due to anything they did during the campaign: but what they did before the campaign. And in most cases, several months before.
The first thing the successful crowdfunders did was build an audience – so whether it was a Facebook Page or an email list, it was building up a list of a few thousand people so they could activate this audience when they were ready to launch, using retargeting ads or emails.
One handy tactic I learnt was to design killer opt-in content on your website. Your ideal audience would subscribe to your email list to get a useful guide or piece of amazing content.
To extend this, one grassroots way to build this email list would be to join Facebook Groups and online communities where your audience is, and share links your opt-in content, so this can keep building this list organically over time.
Related: The 12 Tactics to Launch a Social Media Campaign with No Money
Whether you’re creating an audience on social media or via an email list, the key is to create content which your audience craves so they subscribe now and you can activate them later.

While not every campaign needs bloggers to get on board, those who coordinated with bloggers seemed to have a lot of success. For many projects, this involved researching the bloggers who were interested in the product, reaching out to them and asking them to use the beta version of the product for a few weeks, and finally asking them to publish a review of the product on the week of the crowdfunding launch. Again, this is another task that needs to be coordinated months ahead of time.
To make the blogger’s job as easy as possible, many of the crowdfunders recommended preparing a “social media press kit,” which includes the key points bloggers may need all in an easy-to-read document, including tweetable phrases, the hashtag and the crowdfunding URL for contributions.
Related: [ROUNDUP] How Do I Work with a Social Media Influencer?
Some crowdfunding sites like Indigogo allow you to create affiliate links for your campaign, so for some bloggers, the potential of a passive income stream might be a really useful tactic to get them on board.
While you’re getting bloggers involved, don’t forget about the power of social proof. Highlighting quotes and testimonials from your bloggers will be instrumental in your main campaign marketing to convince strangers on the internet that your product is quality, whether it’s in your video, ads or crowdfunding page copy.
Plan to make the most of these reviews from bloggers and use their testimonials across as much of your marketing materials as possible when the time comes.

Building a community who is obsessed with your product doesn’t happen on its own. You need to keep your audience updated on your product’s progress, how it will help change the world and how they are contributing to this project. Building a movement is a key tactic to get people to share the campaign with their friends.
Plan out your content and milestones so that in amidst the chaos of building your product for launch, you’re still keeping your audience engaged every step of the way, whether this is social media content, blog posts or email newsletters – or a combination of all of them!

The reality is that not all crowdfunding projects see success just with a strong digital marketing plan: if you want your campaign to really take off, having mainstream media attention really helps.
Nearly all the successful crowdfunding campaigns said that PR, or hiring a PR specialist, was instrumental in getting the word out there to get them mentioned in mainstream newspapers, larger blog publications or a spot on television.

Getting your bffs on board

One of the fascinating things I learnt from the podcasts was a little bit about human psychology: people are unlikely to fund a project unless it’s nearly already funded. People want to be back a winner. It’s not worth their effort putting in their credit card details to back a project if it looks like it is not going anywhere. So, if a stranger finds your crowdfunding page, they need to see that this is a project that is “in demand.”
In short, most crowdfunders recommend that you need to try to have your project 20% – 30% funded within the first few days of the campaign so that when a stranger finds your project, they are more likely to contribute.
One handy tip to get that magical 30% funding benchmark: get your friends involved.
If you know anyone who has run a crowdfunding campaign, you’ve probably received a Facebook message in your inbox from your friend asking for a donation: and that’s because it’s one of the most successful tactics to get a campaign funded in that first few days.
The tactic is that a few weeks before launch day, individually reach out to 10 – 15 of your best friends and ask them to back your project the day it launches. Make it as easy as possible for them to know what they need to do: clearly explain to your friends what are you doing, why you’re doing it, how to support it (ie. on this date, go to this website and donate what you can) – an of course, on that date, remind them.
Once you’ve got your key bffs on board, you then need to do the same thing, but for a few hundred more people. Why? Well, this is some maths comes into it…

Hypothetically, if your project goal is $20,000, you want 30% locked in in the first few days, so you need $6000 within the first few days. If everyone is donating $10, you need 600 people to donate. So you need to write to 600 people. And that’s assuming 100% of people you write to will contribute. It might be much fewer. So you might need to contact a few hundred more.
So this is where you pull out your Rolodex and make a list of every person you ever worked with, went to school with, played tennis with or took out on a first date to that handmade noodle place in Chinatown, because you will need to reach out to them all and ask them to donate in order to reach hit the magical 30%.
One cute tip from one of the crowdfunders, was hosting a little launch event at home to help encourage your besties to donate. Fire up the promo trailer on the television, have a countdown to midnight when the project opens and pass around a laptop to have people contribute then and there: it’s a very successful way of getting people to donate immediately as the project is launched.

Once you’ve gotten your friends and family involved on the launch day, it’s now time to leverage the rest of your earned audience.
On launch day, remind your social media followers and email subscribers that your project has launched. Retarget them with ads and tell them that now is the time to contribute. Go hard to get that huge boost in donations you reach that 30%.
Getting a spike in contributions not only helps your project look more in-demand to encourage others to donate, but a big spike in activity might push the project to be featured on the crowdfunding site homepage or newsletter.

The first three is where you combine all of your hard work:

If you’ve been working hard to build up an audience, hopefully, you will hit that 30% in the first three days, then over the 30 days of the campaign, you reach your project goal as you continue these activities.

While a crowdfunding campaign can spread on its own through on social media by people being passionate about your product, it’s by making some very strategic moves before your crowdfunding launch which moves the needle.

Using a combination of traditional media, earned audiences, blogger outreach and personal contacts seems to be the magic mix that many successful campaigns use to get off the group.

Social media is an effective tool to launch a crowdfunding campaign, but unlike a ‘viral’ social media campaign which might take off on its own, it takes a lot of planning and of one-on-one conversations to get a crowdfunding project fully funded.

Have you launched a crowdfunding campaign? Got any tactics that worked for you? Let me know in the comments!